Growing With The Crowd is a weight gain game in which you either use donations or your own hard-earned cash to grow larger! The larger you are, the larger your audience will be, making the amount of donations you receive go up!

A fetishy adventure through a chocolate factory.

I really like this game, but I've had a bit of an issue: once I get the key, there is a popup saying that something is poorly written, and the key doesn't appear in inventory when I restart.

I'm not sure about the popup, but the key doesn't actually appear in your inventory; it just adds back/forward arrows on the left once you restart. Does one show up after the first screen?

I like the reference of the storyline, also the banner's pic and looks cool. Is it planned to get my pointer refer to 'footer'-subtext when hovering the lower textlines in-game (sounds more like a placeholder-info)? I'd prefer visualizing the visited lines same as unvisited ones in colours. 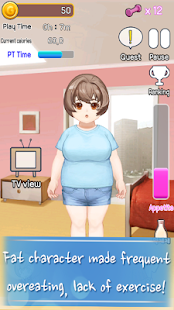 'You walk over to Hiro' .. there's the reply-icon and a bracket that don't suits there? btw: it's the part where I could get a closer look at that 'strange machine'.

Some prev. lines also includes the whole sentence marked in blue/as clickable, even that bracket-icon which represents just the start of a new option for replying.

'creamery', hannah's reply won't include that arrow starting-icon? ('moving closer' to that line e.g. includes the whole line as clickable blue text even that arrow somehow), I'd prefer it like the weight/inventory, that only a specific noun or verb, adjective being highlighted there. Same as one of the lines withing the bakery, before heading out of that pastry room & wonkavision-mk1 (grab an object examining that path before skipping to mk2).

I was clicking 'leaving the inventing-room', after that machine do require to talk to Wonka, I even didn't intro to other guys just heading into the adventure xD when Wonka mentioned if we'd head on, I could still ask about 2 things, one including that boat. Nope, still no preference for now ..want to simply skip it.

Similar to:
eating one size of dough. getting back to the bakery, checking weight. not eating additional ones, while 'back'-option includes again: eat one dough?

mk2, insisting me wearing that VR, while I guess the ending-sequence being kinda 'broken' / should refer to a different in-game line?

Apologies for not responding to this sooner, I dismissed the email then forgot about it. I appreciate you pointing out some of the inconsistencies with the arrows. Some of these can probably be fixed, but it is a huge pain in the neck to format things in twine from their sluggish editor, so I gave up on keeping them perfectly standardized somewhat early on. If or when I make a second version, I will probably be using tweego, which lets you edit in whatever text program you like, and I'll try to see if I can make these more standardized.

Sure, no worries. Hoping my detailled feedback won't sound too picky because of even referring to section where they occur, like which part getting chosen, at least you maybe find the textlines if I'd mention where I was noticing those 'issues' (that's my origin thought about just e.g. single arrows getting marked as underline/clickable there, maybe also happens on paths I didn't examined yet). At least if I just played this game once, you'd know which sections I was viewing and which were not played or tested yet.

Could we get a potential ending eventually similar to Hannah with the cow-berry?

Does anyone know how you can still take the gum from the machine without anyone turning into a blueberry?

You should be able to get it if you talk to wonka to ask about the machine, but *don't* start the tour.

I’ve tried every possible way but it always leads to someone becoming a blueberry if i want the gum. I’m trying to get everyone to be on the tour until the Wonka vision room and have the gum

From the looks of the file, no; you can't get the gum without asking for a demonstration, and doing that cuts off the menu where you can ask Wonka to move to the next room. Apparently there was a 'no takers' outcome at one point, but even if it was implemented, you could only reach it if Hannah already got a bad end.

As it stands, even if you could grab the gum without any blueberries leaving the room, it still wouldn't be with a full party.

I hope you create a sequel or expand on this. It's really good

How does the replicating cake batter work? I handed over the tripping twig and it came up? Is this a secret storyline?

it's an unfinished thing, there's nothing in there at the moment. Sorry.

Possibly. I definitely want to and I've done a bit of work, but it's been incredibly hard to buckle down and get anything done with quarantine lately. I wish I could give a more definite answer.

How did you do the weight system? I'm making a visual novel and i'm very curious

Sorry for the late reply. The weight system is a check on every page in a header passage, which shows an interstitial passage if it detects that you're a certain size. Then there's another passage linked in the footer that just shows you a different passage depending on what your weight value is. If you download Twine and open the project, you can see all these for yourself.

Wow.. my fav endings were 'CREAM PUFF PET' and 'MILK BALLOON' I have played this so many times and really wish to acquire the 'Twine 2' file used to make this, if you have the project file I'd love to look into it.

The file is actually just the html itself. You should be able to open it directly in twine, there's no special compilation process. Try downloading the page itself, if that doesn't work I can find a copy for you tomorrow.

Figured it out. This simple engine is very intuitive and fun to use, I'm quite interested tinkering within the engine, as-well as expanding upon your story + adding more content. Thanks!

I appreciate the offer, but I'm not looking for contributions at the moment. Been a bit busy with art and work and not going insane during quarantine.

Edit: I realize you're talking to someone else (the email I got just said 'there's a response', but in any case I ask you please do not just add to and repost my game (if that's what you were thinking).

To my understanding you must be at least obese (in order to walk into the stable and be heavy enough to trigger the pressure-plate) after that you must drink all the milk yourself. (it's been a bit since I've done this ending so I may be wrong)

This is correct. Spoilers, obviously, but https://pastebin.com/viYCgj7q has a full list of all endings and how to get them (please let me know if any are not working).

According to the list, you can pick the gum without starting the demonstration. However, there is no prompt to place it in your inventory after talking to Wonka.
Is this a bug or was it removed from the game
Edit: found it!
You need to ask Wonka for a demonstration and then a prompt will show to take the gum.

I know this comment is several months old, but he used a free program called Twine to make this, it's in the game description, under 'more information.'

I guess by getting inspired by scenes you visually like and redesigning them in a quite different way, with other locations / protagonist and NPC-nicks, etc.? At least that's approx. how I was coding mine by imagining a video how it could be interesting to think of a game and coding referring lines that affects the game-play's story.

I really liked it. I hope maybe you can create more stuff like this. Also maybe a sequel.

How do I get the most out of player's weight gain? Civilization vi dmg cracked for mac os.