Described As despicable by Senator Edward Kennedy, a downloadable game that re-enacts the JFK assassination is predictably causing a media storm. Developed by Stirling-based Traffic Games, JFK Reloaded puts you in the shoes of Lee Harvey Oswald on top of the Dallas Book Depository, rifle in hand, as the motorcade looms into view on the fateful day of November 22 1963 -all for the price of $9.99. Replicate Oswald's actions accurately, and you could even win a cash prize - with over $10,000 dollars in the pot at the time of writing. 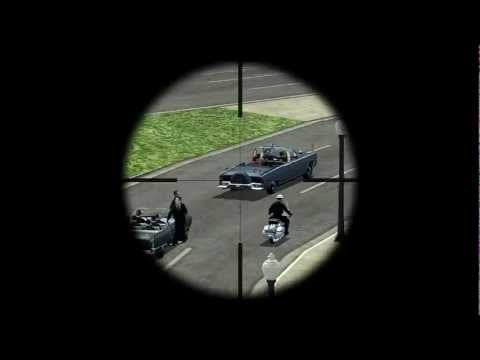 Naturally, the game has caused offence - not least to the Kennedy family - but the debate surrounds the medium rather than the content. After all, you can watch actual footage of the assassination, read about it extensively, visit the museum in Dallas and even stand on the painted cross on the road where Kennedy's head famously exploded. And of course, there's the awardwinning JFK film, which is widely hailed as a masterpiece.

As Traffic MD Kirk Ewing says: It does seem hypocritical to us that because we used videogame technology to recreate the assassination, then we're somehow undermining the event. I personally find Oliver Stone's movie more controversial because he uses film to create conspiracy and distort history for what, I assume, is his own and the studio's financial gain. It's another example of people assuming that somehow by being a game, it's a lesser medium, whereas as we all know, videogames are an engaging and immersive way to experience things.

This would appear to be backed up by the consumer response, with Ewing claiming: It's been a phenomenon, and people are coming back for more and more. We've just put the high-score table up, and at the moment the highest score is 748. That guy is set to win the highest prize ever in videogames history. The most amazing thing has been the level of debate about what we've done. People that have actually used it have written to us amazed at the depth of JFKR. Some people have assumed that the experience would be too short-lived. I don't think they realised that you could play with it so much, but the truth is once you've seen it, you go back to it again and again to try out the different options. Because of the level of technology involved, specifically the ballistics and ragdoll physics we've used, the experience is incredibly rich and detailed.'

With front-page splashes in the broadsheets, and the incandescent explosion of the American media, we can only assume that this piece of controversy is set to be a lucrative one. The game itself is a fun one, all 30 seconds of it, but we can also report that every shot tends to come with a feeling of being pretty disappointed in yourself. Entertainment, outrage, money-spinner, or all three? The lines get even blurrier.. 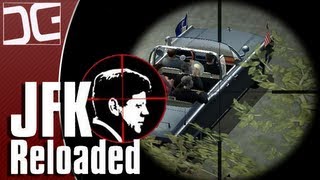 In my previous post on Play the Past, I looked at the way critics and scholars made sense of the videogame JFK: Reloaded (Traffic, 2004). The game lets players reenact the Kennedy assassination, the goal being to match the findings of the Warren Commission Report with as much accuracy as possible. Even though the Kennedy family called the game “despicable,” many scholars argued that JFK Reloaded was a legitimate engagement with history (see Raessens, 2006; Bogost, 2007; Fullerton, 2008; and Bogost et al., 2010). For my own part, I argued that the game’s greatest strength was not as a documentary videogame, but as an engine of counterfactual historical thinking. JFK Reloaded doesn’t ask us to play history so much as to reimagine history.

Today I want to double back on my and these other videogame scholars’ interpretations of JFK Reloaded. The game is indeed part of a documentary tradition, or to be more precise, an engagement with documentary evidence and historical archives, as Poremba suggests. But it is also a historical artifact itself.

In other words, the game emerges out of a specific time and place, textured by the touch of countless hands. I want to look at a very precise kind of texture, the human-readable comments that appear in the code in one of the two WAD files that comprise JFK Reloaded‘s game assets. WAD stands for “Where’s All the Data?”; a WAD file is a collection of individual sounds, sprites, level information, NPC (non-playable character) behavior, and other often customizable game data. Originally used in Doom, WADs or similar composite files are now commonplace in many PC games.

In the case of JFK Reloaded, opening up the core000.wad in a text editor reveals mostly binary codes that look like junk (because they ought to be opened in hexadecimal editor rather than a plain text editor). But beginning with line 224,070, we find plain text information that resembles XML structured data, accompanied by programmer comments.

For example, the following lines specify the actions that should occur when a generic character is fatally hit by Oswald’s rifle:

Notice the double slashes: //. Any line that begins with the double slash is a comment in the code. Code comments pose a number of interesting epistemological challenges. They are ignored by the machine interpreter and readable by humans, but not exactly legible. They are visible only if one is able to view the source code. They are not intended for the end-user, but with the right tools, the end-user might find them. In fact, I wasn’t the first to find these comments in the JFK Reloaded WAD file. BrooksMarlin noticed them in 2004, but nobody to my knowledge has ever read these comments against the game itself and against the existing scholarship on the game.

We can think of code comments as a kind of textual marginalia—the doodles, notes, and corrections that authors and readers add in the margins of a text. When I asked on Twitter if marginalia was an accurate way to think about code comments, Patrick Murray-John, a developer at the Roy Rosenzweig Center for History and New Media (who also happens to have a Ph.D. in Anglo-Saxon literature), suggested that the medieval division of marginalia into separate categories might have an analog in computer code comments. As Murray-John notes, medieval scholars distinguished between lectio and enarratio. Lectio refers to aids for reading at the level of comprehension—notes and marks that help a reader make the text legible (originally for the purposes of reading aloud). Enarratio refers to marginalia that actually help readers interpret the text on a rhetorical and symbolic level. To lectio and enarratio we might also add, as Whitney Trettien suggests, emendatio, comments that correct or even offer improvements to the existing text (such as we might find in an open-source project, with one developer making suggestions on another developer’s code).

The marginalia in JFK Reloaded‘s WAD file resembles enarratio, not only helping us to make sense of the individual lines of code that follow the comment, but also offering an interpretative gloss on the code. For example, in the following snippet, Jackie Kennedy’s actions are defined:

The use of the informal and vaguely sexual phrase “money shot” begins to shed some light on the developers’ attitude toward the subject matter (what we’d call the author’s “tone” in literary studies). The strictly objective perspective that we (often falsely) associate with documentary media begins to dissolve here.

The tone becomes much more obvious in the following snippet of code, which defines Nellie Connally’s actions when her husband, Texas Governor John Connally, is shot:

In just three lines of code commentary, the developers at Traffic absolutely undermine the entire stated pedagogical project of their docu-game. Their outwardly respectful “interactive reconstruction of John F. Kennedy’s assassination” is undone by inaccuracies and misspellings (Nelly for Nellie, “desparate”) but even more so by the explicitly sexual reframing of this traumatic event. It’s difficult to take JFK Reloaded as a serious exploration of history when under the hood it resembles an adolescent joke, preoccupied with sex and making light of death (“before he croaks”).

In addition to undermining Traffic’s official rationale for the game, these comments in the code also complicate the arguments of the critics who defended the game. Access to the code allows us to write a revisionist history of JFK:Reloaded. Yet how far should we go in letting the marginalia of the game, which was never intended to be available to the player, guide our interpretation of the game? On one hand, it’s important to keep in mind the “intentional fallacy,” the idea—first formulated by New Critical literary scholars—that an author’s stated intention should be ignored when interpreting a literary work. One should trust the story, not the storyteller, this line of thinking goes. One the other hand, though, the exegesis of the underlying code and assets of the game expands the story itself.

In the final analysis I’m more interested with these broader questions of critical code studies than this particular game. What does an attentiveness to code, or even the comments in code, mean for cultural historians who study digital artifacts? Decoded and viewed through a revisionist approach, these questions might be the ultimate legacy of JFK Reloaded. 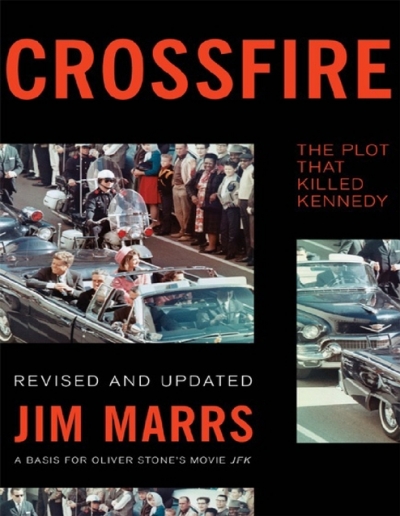 Fullerton, Tracy. 2008. Documentary Games: Putting the Player in the Path of History. In Playing the Past: Nostalgia in Video Games and Electronic Literature. Vanderbilt University Press.